The US Treasury Yield Curves #2 – Do you factor inflation into the deal?

In the previous article we posted, mention was made of the (0.72)% [negative 0.72%] real return US Treasury investors can currently expect on 5 Year Treasury Bills.  The Nominal (quoted) Yield Curves and Real Inflation adjusted) Yield Curves for two specific points in time, namely Friday 29 July 2011 and  30 July 2006 are listed below. 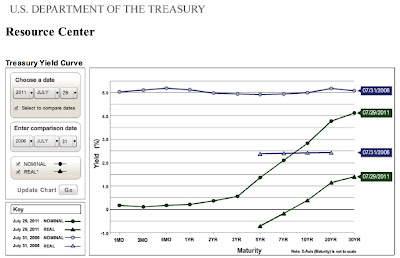 Yield Curve 1
What is interesting to note is the very flat nature of the Yield Curve for all T-Bills at the end of July 2006, at around a 5% Nominal Return for investors.  Yet the most significant fact is that the Real Yield was around 2.37% on 5 Year Treasuries, versus today’s (0.72)% on 5 Year or (0.18)% 7 Year T-Bill yields.  In order to generate a very small Real Return, you have to be looking at purchasing a 10 Year T-Bill to obtain a modest 0.38% Real Return in today’s market.
A cynic might make this remark:
“Not only do you pay your taxes, but with the negative Real Yields on both 5 & 7 Year T-Bills, you are paying the government to hold on to your cash too”
They win both ways!
theMarketSoul ©2011
Source Material:  US Treasury web site:
http://www.treasury.gov/resource-center/data-chart-center/interest-rates/Pages/Historic-Yield-Data-Visualization.aspx


Conspiracy theories!
Today we express an opinion on the phenomenon of ‘governmental’ economic landscape shaping.


Interference whether actively pursued or via involuntary actions heightens our sense of concern by the effects that the aggregation of supply and therefore the encouragement, either directly or indirectly of oligopolistic and monopolistic market structures, is having on the global competitive landscape.


It has occurred in the financial services sector and it happening in the oil industry too.


Even though the barriers to entry are relatively high, having fewer competitors on the scene cannot be a good thing.
The trends we are spotting in the competitive landscape are as follows:


Imperfect competitive firms (many market participants with differentiated products and services) are being deluged with over burdensome bureaucratic regulatory requirements, shifting some of these additional transaction costs onto the ultimate (final) consumers, whilst in strategically important industrial complexes, such as energy supply, the aggregation effect is indirectly encouraged to ensure that national strategic and security interests are promoted.


[An article we wrote in mid 2010 during the height of the BP Gulf of Mexico oil spill disaster, but somehow never published.  The theory is just as relevant today when we speak about the Debt Ceiling crisis...]

The US Treasury Yield Curves – Are the markets really that bothered?

As a general introduction today we will look at two US Treasury Yield curves.  The first Yield curve in the Curve graphic 1 below is the 3 Month bills compared to the 10 Year bills over the last 5 years. 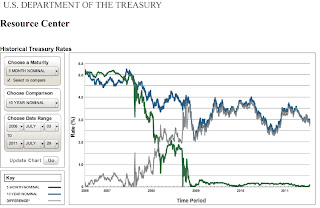 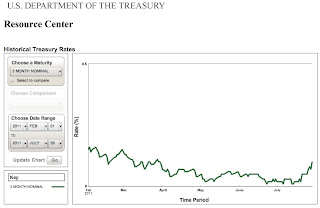 Yield Curve 2
In real monetary terms it is costing 5 Year Treasury bill holders (0.72%) (Yes a negative return of 0.72% currently to buy 5 Year Treasuries. (See US Treasury web site).
It will be interesting to observe and track the trends over the coming days, especially as we kick off August and Debt Ceiling D-Day in the US congress and Senate.
theMarketSoul ©2011
Source Material:  US Treasury web site: http://www.treasury.gov/resource-center/Pages/default.aspx
Posted by theMarketSoul.com © 1999 - 2012 at 13:52 No comments:

Never resist the temptation to start a discussion with a pun.
In our previous article we highlighted the ‘battle royal’ on Capitol Hill to get a proposal agreed to address the possibility of a US Treasury default, whether actual or technical on or after 2 August 2011.
So the Republicans could not muster together enough support on Thursday to ensure safe passage of the bill to the Senate, where it looks likely to be overturned or severely amended in any case.
There is obviously a lot of back room dealing going on over this and analysts in Europe (taking their beading eyes off the Greek and now Italian and Spanish dominoes) have started to pay attention to the goings on across the pond.  We heard one commentator mention the fact that the USA’ reputation has already been affected by this, irrespective of the fact that a default occurs or not.
So there you go.  The fringe minority floating in the ‘Tea’ cup with a lack of the ability to look over the brim of that particular cup, might in fact achieve their overall objective of raising their own profiles, albeit at the expense of the nation’s reputation and standing as a pillar of the international capital market.
Look, we are not choosing sides here, because at the heart of the matter is the fundamental principles of civil society versus the public sphere debate raging and continuing to rage in the USA.
In our next article we will highlight some of the basic differences in opinion and views on the size and influence of government in the USA versus Europe, via the Rahn curve analysis.
Until then, it is tick, tock; tick, tock whilst we await the vote and subsequent consequences and fall-out from the US debt ceiling debate.
theMarketSoul ©2011
Posted by theMarketSoul.com © 1999 - 2012 at 09:53 No comments:

It is a confidence thing.
We are so very, very close to seeing and experiencing another colossal collapse in confidence in the world’s financial system.
This time it is driven by the ‘US Debt Ceiling impasse’.  A steady flight to gold has been taking place over the past few months and even though most informed commentators believe the  US Treasury ‘default scenario’ is not likely to physically occur, the mere threat of a default has not yet managed to ‘focus the minds’ of the US congress house of representatives locked in an ideological battle over fundamental economic policy and direction.
At stake here is a scenario that will make the 2008 financial crisis wane into insignificance, should the threat of a US Treasuries default actually play out.
Yet, very few mainstream headlines outside of the United States have been published about this potential catastrophic event.  And we are only a few days away from the edge of disaster (Default D-Day is chalked up for Tuesday 2 August 2011) and the Washington Post has a default clock ticking down on this deadline web site.
If a default actually occurs, confidence in the international capital and currency markets will have been breached and no serious commentator has yet fully quantified or effectively mapped out the potential consequences of this potentially disastrous collapse in capital market confidence.
The only significant contribution we can make at this publication is to cross our fingers, hold as much in cash and liquid (non US dollar) assets and hope that some real focus and a meeting of minds occurs before Tuesday 2 August 2011 on Capitol Hill.
theMarketSoul ©2011
Posted by theMarketSoul.com © 1999 - 2012 at 08:12 No comments:

The Elusive “G” Factor! – Part 1 [Economics in a Nutshell]

An Introduction
There is a conundrum here somewhere!  As a libertarian leaning Think Tank organization and publication, we instinctively know that more government interference in the economy and bigger government per se is not a good thing.  And so is sovereign debt and the servicing of that debt.  Both are drains on the economy and economic potential of any sovereign nation, yet both are necessary evils too.
But where lies the ‘sweet spot’ between the size of government, fiscal policy, sovereign debt (if necessary)?  The magic formula or ratio between the public and private sectors and their respective shares of the economic output pie?
These are questions the political and business leaders are struggling to understand and define in Europe and the USA at this point in time in order slowly and arduously drag their economies back to a ‘normal growth cycle’.
Part of the challenge we believe is the massive imbalance created by the shifting nature and sources of production, combined with the rapid uptake of technology and the disruptive influences of technology.  Our planning cycles and hence levels of understanding and ability to adjust the factors of productions to keep up with these disruptive forces are being severely challenged.  Or maybe our grasp of the theory underpinning our economic models just aren’t up to coping with the rapid nature of change and forces of change in the global economy.
As has been argued in previous articles, by its very nature the instruments we utilise to adjust economic activity and output in specific geographical locations, namely fiscal (tax) and monetary policy, are very blunt instruments and not as effective and able to cope with the speed of change in given economies.  But are their any other mechanisms we can utilise to adjust unfavourable behaviours and activities in order to get back to equilibrium?
A further factor we believe is a lack of understanding of where exactly we are in the global economic adjustment lifecycle.  There is no real comprehensive understanding and agreement at best of these influences.  True mechanisms like the G8 now G20 have been created to address more global challenges, but there is hardly ever consensus and a collective will to act in unison to address the bottlenecks and imbalances in global economic activities.
With this introductory article we have laid out some of the areas to explore and bring back into the ‘light of scrutiny’ as part of a deeper understanding of the nature of our global economic state and status.
theMarketSoul © 2011
Posted by theMarketSoul.com © 1999 - 2012 at 08:23 No comments:

The Elusive “G” Factor! [Economics in a Nutshell]

Everywhere the elusive “G” Factor is beginning to raise its head in the discourse of politicians and business leaders alike.  When will a sustainable and prolonged period of economic growth start to manifest itself and drive forward development and wealth creation?
This is a very complex subject area and in a series of articles we will attempt to define and understand the drivers and blockers of growth.
We will investigate and explore the traditional factors of production along this journey and uncover the truth around debt, monetary policy and fiscal policies and stimulus process.
Any contributions and clarifications are more than welcome on this short journey along the Economics in a Nutshell series.
theMarketSoul © 2011
Posted by theMarketSoul.com © 1999 - 2012 at 08:41 No comments: